There's been a few posts floating around on the idea of 'hypothetical' time periods and so I've decided to jump on the bandwagon with four two more (there used to be two more but neither were quite as fleshed out). For the sake of variety from the previous posts, these are based off weird or unique fantasy landscape images. No bird age here, however*

The Great Funkadelican Era
Colors didn't always work entirely how we think they did. Before the era of humans, the land was dominated by civilizations of insect and crustaceans which could see a myriad colors. However as they grew more advanced as a civilization they saw fit to first categorize all colors and later to impose their own vision of beauty based on their peculiar color theory which only made sense to their alien eyes. Using great magic or science they began the 'great color mixture', combining colors which were never meant to be combine and which our puny minds and eyes cannot even begin to grasp. For a brief time the world was a technicolor funky mess to our primitive and distant ancestors but then the bug-crustaceans mixed colors which should have never been mixed, destroying the vast majority of colors in the process leaving us with those we know and a few survivors beyond our senses such as Jale, Ulfire and Dolm. And man, did that era look funky. Sadly the only ones who remember it are the mantis shrimp who still fly the colors of this bygone world. 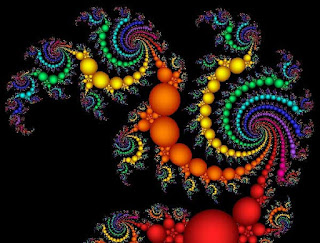 The Endless Fractal
Well, maybe not so endless as it did end: the thing is nobody can really understand how and why. By nature, the Endless Fractal was when the universe was entirely fractal. Individuality didn't quite exist as we knew it because every organism we could perceive was itself made of smaller organism made of smaller organism who...well, you get the idea. And, indeed, the very fossils which survived to the modern day are themselves part of a bigger organism which was itself part of a bigger...again, you get the idea.