Silent Legions or 'How To Do Lovecraft Right' 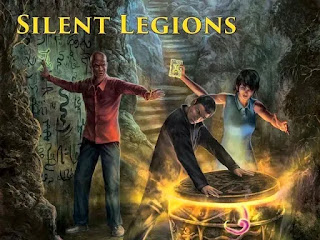 It's a known fact I hold a very positive opinion of Kevin Crawford's work in so much as his tabletop games are concerned. There's not a whole lot I truly know of the guy overall (and to be honest maybe it's better that way) but he's generally never failed to produce excellent games, especially in the area of his sandboxing tools. KC's work is generally defined, in my opinion, by a strong support and encouragement of GM to build things their own way and providing the right tools for it and nowhere is this more apparent than Silent Legions.

I've bitched about Lovecraft and his mythos before or, rather, why it's a bad idea to use it. Lovecraft's own work is something I do enjoy and find quite good but my issues with it exist beyond the man's original writing. By themselves, these stories are fine. The problem emerge from Lovecraft's mythos being held as some coherent fictional universe by his friends and future writers. To do so completely miss the point. Even worse: to use his mythos for tabletop is generally a terrible idea overall. When looking at the Lovecraftian universe in a vacuum (as in just HPL's story) there is a very clear understanding that we the readers are supposed to not know what horrible monsters and dreadful gods exist just as much as the protagonist is initially in the dark. Knowledge of things such as Great Old Ones and sorcery are limited to older text and personal journals, the kind of things which academic papers or (in the modern time) Wikipedia would not deem reliable. The mythos exist below the surface of accepted historical and cultural details.

The problem emerge when one decide to run Call of Cthulhu or any other RPG using Lovecraft's mythos. People who run and play these games miss the point entirely. They play with a group who knows what to expect. Even if we separate the player/character knowledge there's an implicit knowledge of the expected genre conventions and the overall, overarching mythos or, worse, a desire from the GM to actively reference it. This is a mistake and completely flies in the face of the original texts. There's a reason the better 'Lovecraftian' works of the past few decades have been divorced from H.P. Lovecraft's universe. If the entire genre is built on things man was not meant to know, then why is it that modern Lovecraftian works plays it safe and rely entirely on things the audience know and expect to see? Silent Legions offer a simple solution of offering sandbox tools and GM aide to build their own nightmarish reality.

Otherwise you end up with a group thinking the point of it all was 'tentacles and weird unpronounceable names'. Which I think does a major disservice to the work of Lovecraft.
Posted by Bob Something at Wednesday, May 20, 2020